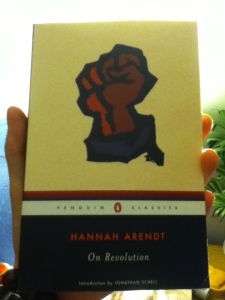 Entropy decreases wherever humans exist. All successful revolutions follow that law by consolidating more power than they destroy.
272 pages, ★★★★★

I’m 23, and am therefore to young to understand this book. It requires background reading on the American and French revolutions and discusses them in great detail, which I’ve never done. I should read this again when I’m 30.

However, chapters 1 and 2 of On Revolution were understandable. I learned that successful revolutions put order back into society (i.e. decrease entropy). Revolutions destined to fail take order away. (I think.)

Chapter 4 backed this up. The US constitution created far more power than it destroyed. And since [destructive] violence defeats [constructive] power, which defeats the law (chapter 4), the French Revolution descended into destructive violence and left France to Napoleon, whereas America thrived. (Or something like that.) I learned that revolutions, in order to succeed, must build more than they destroy.

Three thoughts on “On Revolution“

This makes me wonder: today’s China is the China that would have existed 30 years ago if the Nationalists had one the Civil War. In China, we are now surrounded by all the ideas and institutions that the Communists originally vowed to destroy. It’s classic Animal Farm: it’s only because they changed mindsets in 1978 (Opening Up & Reform) that the “Communists” are still in power.

Which leads to… governments are toppled not because they become too large (a view I’ve heard in reference to ancient Chinese history), but because they stop growing, (i.e. they stop decreasing entropy, or stop consolidating power). Revolutions occur in politics for the same reason that recessions occur in economics: if you halt growth (i.e. the consolidation of power) then the laws of political and economic entropy will solve all your problems through recession or revolution.

Two more thoughts (are these in connection to the book? I don’t know)

I might be completely wrong, because I’ve never studied anything, ever. Would anyone who understands this book more than I do please share their insights? Thank you. ★★★★★

4 thoughts on “Book: On Revolution”